“As I remarked to you then, I really enjoyed your speech – maybe you should spend some more time on the other side of the lens! That said, I thank you for your book of photographs, really wonderful; enough to make a fellow want to hit the road and see this great country of ours. Where’s a 57 Chevy Convertible when you need one?” –Michael R. Bloomberg, Mayor, New York City

“We want to thank you, again, for your time and excellent presentation to members and their guest of the Channel City Club. It was a wonderful program for our holiday luncheon. Good luck as you travel across the country with your inspirational message and pictures.” – Judith Hill, Executive Director, Channel City Club, Santa Barbara, CA

“To Joseph Sohm with thanks for your photograph for my book (My Life) and photo contributions to the William J. Clinton Presidential Center. You’ve collected beautiful imagery of our country, and I hope it will inspire many people to travel throughout America.” – President William Jefferson Clinton

“The Prince of Wales has asked me to thank you most kindly for your thoughtful gift of the book “Visions of America.” His Royal Highness would be grateful if you could pass on his especial thanks to Joseph Sohm. It is a wonderful volume which captures the spirit of all that is best about the United States.” Benet Northcote for the Prince of Wales 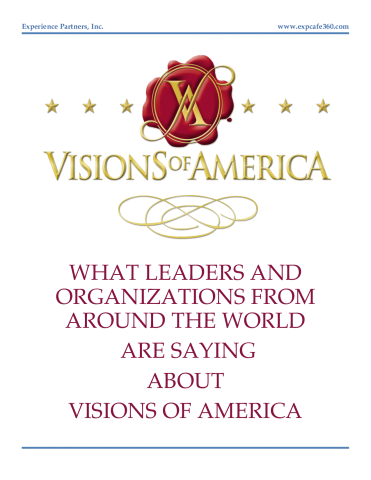 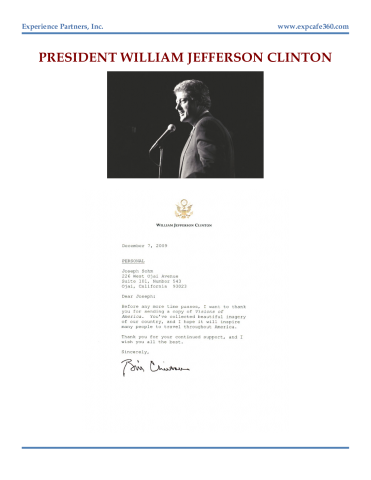 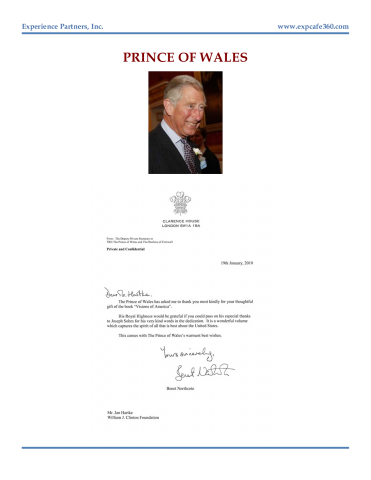 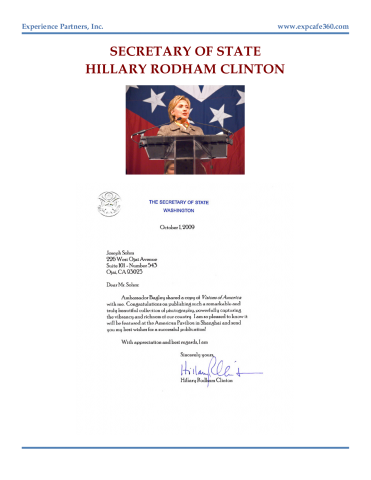 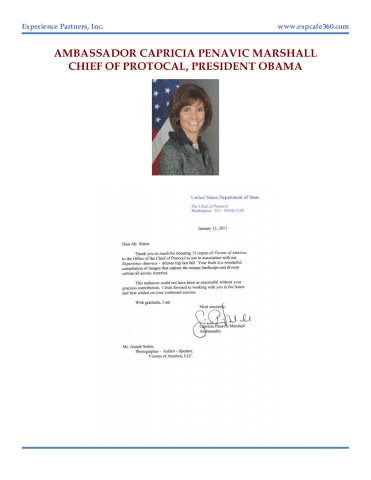 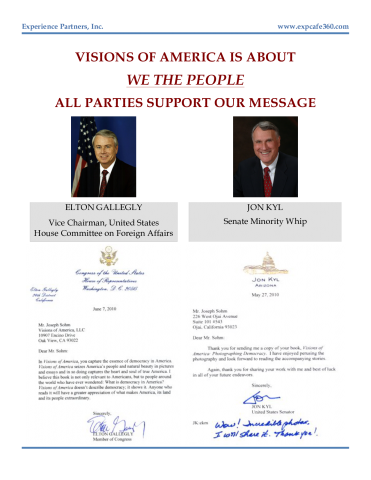 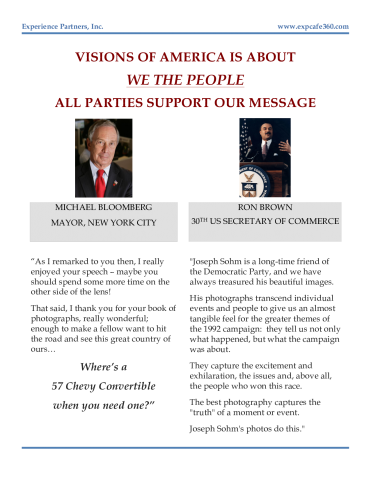 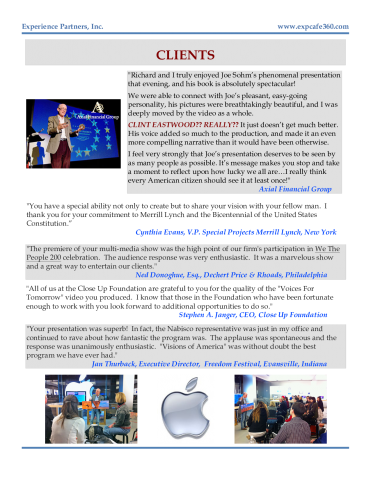 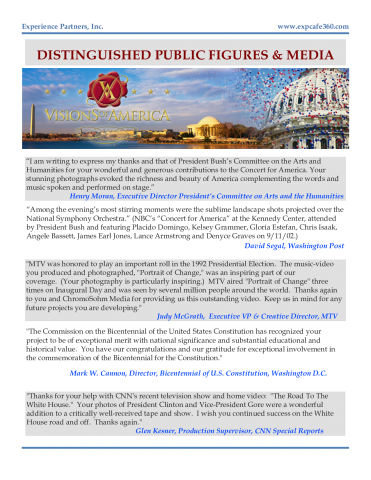 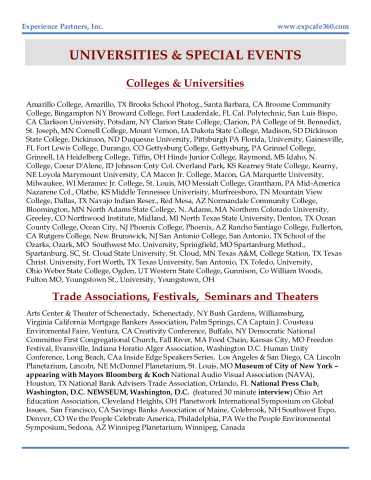 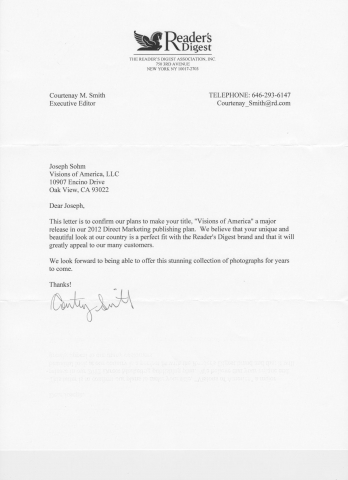 “I am writing to express my thanks and that of President Bush’s Committee on the Arts and Humanities for your wonderful and generous contributions to NBC’s “Concert for America.” Your stunning photographs evoked the richness and beauty of America complementing the words and music spoken and performed on stage. – Henry Moran, Executive Director President’s Committee on Arts and the Humanities

“Your presentation was superb!  In fact, the Nabisco representative was just in my office and continued to rave about how fantastic the program was.  The applause was spontaneous and the response was unanimously enthusiastic.  “Visions of America” was without doubt the best program we have ever had.” – Jan Thurback, Executive Director,  Freedom Festival, Evansville, Indiana

“Congratulations on publishing such a remarkable and truly beautiful collection of photography, powerfully capturing the vibrancy and richness of our country. I am so pleased to know it will be featured at the American Pavilion in Shanghai and send you my best wishes for a successful publication!”– Hillary Rodham Clinton, The Secretary of State

“Just a note to express my sincere appreciation for your most professional presentation.  I had many comments from those in attendance that it was one of the most elegant and thought-provoking presentations they had ever seen.  Again, thanks and congratulations!”— Joseph E. Jones, V.P. Conference of State Bank Supervisors, Washington, D.C.

“Thank you for participating in “Inside Media” at the Newseum. Your comments at the “Visions of America” Program illustrated how your photographs capture the heart and soul of the nation. The images provided a wonderful backdrop for the program and on the atrium screen for Newseum visitors throughout the Independence Day weekend. We hope you enjoyed the program and look forward to working with you again.”– Rich Foster, Program Director, Newseum

“MTV was honored to play an important roll in the Presidential Election.  The music-video you produced and photographed, “Portrait of Change,” was an inspiring part of our coverage.  (Your photography is particularly inspiring.)  MTV aired “Portrait of Change” three times on Inaugural Day and was seen by several million people around the world.  Thanks again to you and for providing us this outstanding video.  Keep us in mind for any future projects you are developing.”— Judy McGrath,  Chairman and CEO, MTV

“Thanks for your help with CNN’s recent television show and home video:  “The Road To The White House.”  Your photos of President Clinton and Vice-President Gore were a wonderful addition to a critically well-received tape and show.  I wish you continued success on the White House road and off.  Thanks again.”— Glen Kesner Production Supervisor, CNN Special Reports

“Joseph Sohm has created an iconic portrait of this great nation.  He captures our marvelous mosaic in timeless images that inspired our Founders as they inspire us today. Sharing his love for country, Sohm has delivered a glorious and moving tribute to America.” – Catherine Crier, Judge, journalist and best-selling author

“Open this book and you are on your way to a most unique adventure.  The road of America lies before you in picture, word and song.  So turn the pages and treat your eyes, your hearts and minds to Joseph Sohm’s Visions of America.”
– Alan and Marilyn Bergman, Oscar and Grammy winning songwriters

“Joseph Sohm has an unblinking eye and a gift for summing up a whole complex mood in a single shot. There is a great deal of love in his photographs, but dedication too. The hardest landscapes of all to photograph – or to write about – are those that are familiar to us. There are many great travel books about Africa and India – far fewer about the United States. I was moved by the intensity of the color and light throughout, and began to think how America is a destination, not a stepping-stone or a passageway, but a place people seek, to stay for good, to raise families and vow never to leave. Studying these iconic images, it is easy to see why this is so.” – Paul Theroux, Best Selling Author

“So how do you photograph democracy?  Well the answer provided by this book is that you set Joseph Sohm loose with his camera.  Fifty states (and beyond) later, “Visions of America” is certainly a grand technical achievement, but it’s so much more than that as well.  It’s all here — the beauty, the icons, the contradictions, the wisdom, and the yearning for that more perfect union.  When you look at America through Sohm’s viewfinder you will see truths revealed.  The dream of America and the promise of democracy come alive through images both new and familiar.  This is a journey worth taking again and again.  Dazzling, stunning, and profoundly American.”

“The premiere of your multi-media show was the high point of our firm’s participation in “We The People 200” celebration.  The audience response was very enthusiastic.  It was a marvelous show and a great way to entertain our clients. – Ned Donoghue, Esq. Dechert Price & Rhoads, Philadelphia

“Both the technical quality of the presentation and the quality of the creative content make your program an invaluable addition to the national celebration in Philadelphia of the 200th anniversary of the United States Constitution.”  — Fred M. Stein, Executive Director, WE THE PEOPLE 200, Philadelphia, PA